Omnisopie - mankind according to Dueck

(Sorry, German only). Dueck develops a unifying philosophy standing equal to Plato, Aristotle and Epicurus. While the three Greek gentlemen tried to define and devise a philosophy that can be applied to all of mankind, presuming everybody "ticking" equal, Dueck reveals that there are 3 archetypes of people: the correct people, the true people and the natural people, with each of them represented by one of the philosophers. 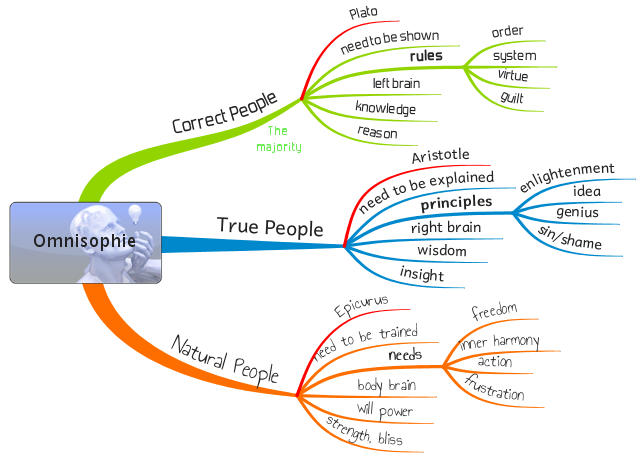 The difference stems from the primate of thinking in the types: left brain (the computer), right brain (the neural network) or body brain (the gut feeling). Only when recognising these three fundamental types a philosophy that does justice to all can be developed. On close to 450 pages he dives deep into explanation and details for this distinction.
In today's world the correct people, who run systems and ensure orderly conduct, are the majority (and thus considered to be "normal"), while the true people are confined to science, philosophy and the occasional guru (of whatever discipline). The natural people have been tamed and can run their instincts in the "fun society" which is expensive enough, so they need to subdue to the system, to be able to afford it.
Everybody uses an internal seismographic/sensory system, that indicates what needs attention. Based on the personality type we are initially equipped with a different set of sensors and thus needs and priorities. Over time with experience and education new sensors are planted, that fire off on different input. This way parents, teachers, role models and the society at large can alter the behaviour of any individual and overlay the natural tendencies. But it will never be more than an overlay and the true nature will try to get through.
This mechanism stems from our oldest part of the brain from a time where a split second decision "freeze, flee, attack" could decide over life and death and "thinking it through" was an unaffordable luxury and mostly deadly. Since speed is of essence the sensory system is drilled to act on incomplete data. Just a high enough probability, not a certainty, is "pulling the trigger". It works pretty much like Pavlov's dogs. So if something looks like "as if", the trigger is pulled and the alarm goes off. A constant fire of these sensors brings us into, how Dueck calls it, the flash mode, where we react more than we act.
The three archetypes have four common strategies: The ruler, the hunter, the eremite (Dueck calls this strategy "the wren", but I like eremite better) and the castle builder. That results in 12 core patterns of how we tick and what is important to us. Together with additional 5 criteria Dueck distinguishes 60 types (details on that warrants an additional post), that are very unequally present, with correct people in majority. One insight out of this is, that Maslov's hierarchy of needs needs to be rewritten for each of the types. The current model puts people in a hierarchy where first needs (natural) need to be fulfilled, then one integrates into a system (correct) before the maximum of self realisation (true) could be achieved. For Maslov, a true person, it was natural (pun intended) that "truth" represents the highest value.
Our educational system is designed to produce correct people, as it was necessary for the industrial revolution, where a large number of people was needed to fulfil well defined task, literally "fit into the system". Today, with an abundance of factual knowledge, that is an outdated model. Anything clearly defined and repeatable can and will be handled by automated systems. The new needs are creativity, deeper insights and gut decision making abilities. Dueck advocates that after (mathematical) intelligence, emotional intelligence now the time has come for Professional Intelligence

(Sorry German only).
So we live in a time where the correct people need to hand over the reign to the true people. Could that be the Age of Aquarius coming? Naturally that isn't without friction and some of the current turmoil could be related to that.
Dueck builds his argument on a broad foundation citing not only above gentlemen, but also Confucius (a correct philosopher), Kirkegaard (a natural philosopher), Lao Zhe (a true philosopher), Freud (a correct psychologist), Carl Jung (a true psychologist), Carl Rogers (a natural psychologist), Kant (a correct philosopher), The Buddha (a true teacher of detachment), The Jesus (a natural teacher of love) and many more.
I tremendously enjoyed reading the book, it is full of insights and "bingo" moments. Here a two of them: To become the master of one's seismic trigger mechanism one has to enter silence and detach from the world to reach a state of Awareness (yes - with a capital A), an insight available to mystics since the beginning of time (I strongly recommend: go on a retreat with members of your faith to practise stillness. Don't have a faith? Go with the Buddhists, they won't try to proselytise you).
The second one: the most successful form of government, with its idea of separation of powers, closely resembles the trinity of correct, true and natural: The government are the doers (a natural property), the parliament ensure due process, so everything is correct and the judiciary ensures that everything stays true to the spirit of the democratic idea.
The concept of a trinity is very pervasive in religion. For Christians the trinity stands for The Father (correct), The Son (natural) and The Holy Spirit (true). For Buddhists it is The Buddha (true), The Dhamma (correct) and The Sangha (natural). I'm sure you can find that elsewhere too. Stay tuned for more on Omnisophie