There are wonderful and awesome strategies how to organize your data centers and back-end data processing. Often these back-ends are supposed to be accessed by " Thin Clients", replacing " Sick Thick Clients" or " Fat Clients" which are considered " legacy (read: tried, tested and boring)". Looking at the memory foot print of modern browsers I can't see the "thin" part. My guess the "thin" actually should mean: " Comes with the Oerating System and doedn't need to be taken care of." Never mind the security patches and frequent updates. The opponents of "Thin Clients" coined the term " Rich Client" which indicates connectedness and rich interaction models. The IMHO real difference is single purpose, disconnected clients (like your old school spreadsheet, minus Quickr/Sharepoint) vs. connected application platforms. And looking at the platforms the dust hasn't settled (yet). Regardless of what platform one picks, the challenge today is device diversity. You might have standardized on X, but you can make a save bet, that a C level executive will hand you a device Y and demands to make it work for your enterprise applications (typically Y ??? [iPhone, Palm Pre, Blackberry, Android, {Stuff-you-never-heard-of}]). Anyhow you face the real-estate challenge: 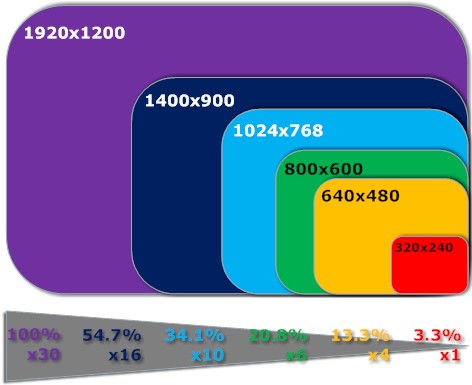 Your 24" monitor (60.96cm for readers who live in the EU) with its 1920x1200 resolution shows 30x more pixels than the small smart phone with its 320x240 screen. Your strategy should allow for as much reuse as possible. Here are the current options as seen through my personal bias: Conclusion: What platform is best for Enterprise developers? It depends. In any case Eclipse can be used as IDE for any of the above platforms. For new modules you definitely want to have a look at HTML5. Once you follow a modular approach, you need to find an aggregation engine. This can be serverside (IBM recommends Portal and Mashups) or on the client (that would be Lotus Expeditor). I don't expect a large number of Expeditor based applications (in Expeditor lingo: plug-ins) for general consumption other than Symphony extensions, but I can see quite some enterprise uptake (ask your IBM client rep).
Update: Found a nice tutorial how to use Web UI in Eclipse applications.
As usual YMMV.