The perception of emptiness

In an ACI Singapore class I'm studying Master Shantideva's famous work " A Guide to the Bodhisattva's Way of Life" (Bodhicaryavatara). A recurring tenant in his, or any other deep Buddhist teaching, is the concept, that the perception of the world around us isn't coming at us, but from us. Objects around us have no inherit nature without being observed (did the tree in the forest fall if nobody sees it?). The true nature of things is emptiness which Buddhist practise tries to perceive on the road to enlightenment.
My scientific mind screams: that cannot be! Nature is as it is, it doesn't care if it is perceived or not. Gravity was there, long before Newton was hit by an apple and works as it works, regardless of our understanding for it.
I have a tried and tested strategy to deal with things I don't understand: I try to explain it to others. Works more often than not. Here we go: 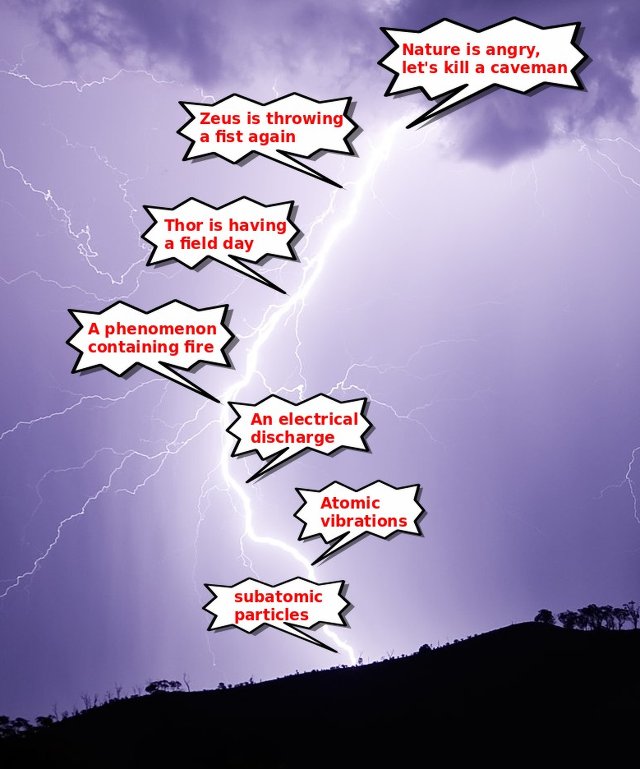 (image based on a Wikimedia original)
Looking at the perception of a lightning: over time it moved from "the gods are angry" to "a weather phenomenon" to "an electrical charge" etc. With each scientific discovery our understanding of the phenomenon changes - this is by the way the beauty of the scientific method: adopting our view of the world based on our expanding abilities.
With each insight we commonly believe to get closer to the real nature of things, unless you ask really smart people who confirm, every answer poses more new questions.
In a nutshell:
Our perception of "reality" is limited and defined by the filter of our abilities, preferences or insights (one man's delight can be another man's poison). Whatever we discover, we are stuck inside our ever expanding balloon of perceptions, not able to see through the skin and encounter the reality outside. To perceive the ultimate reality we need to pierce through that shell called the "I". Buddhists suggest to use deep mediation for that. Leaving the I behind, the duality between observer and observed breaks down. At that moment the realisation kicks in, that the ultimate reality is emptiness.
Sharing such an experience is (almost?) impossible, Lao Tsu tells us why in the: Dao De Ching:" The Tao that can be spoken is not the eternal Tao". So here you have it, the spiritual triptych of attempts to label what defies labeling: " Emptiness, Ultimate Reality, TAO"
Something to chew on: when the I dissolved, who had the realisation?