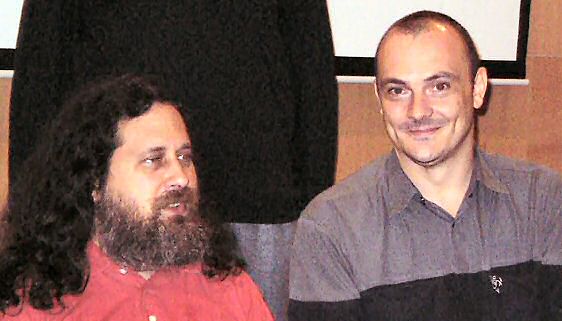 The Singapore Management University ( SMU) invited Richard Stallman to speak about Open Software for developing countries and about software patents. The session was co-organized by the UNDP, who takes a clear stand pro open software. Stallman is a very entertaining speaker who advocates his message with great passion and humour. He made the audience including me laugh quite a number of times.
Stallman stressed, that free software does NOT mean free as in beer, but free as in freedom. He highlighted, that the English language seems to be poorly equipped to distinguish this terms and that local languages seem to be more suitable to express the difference of these concepts.
Stallman himself seems to personify the nemesis of any sleek software executive. He was standing barefoot at the podium exposing manners of personal hygiene that, measured with European middle class standards, are rather questionable. Either he didn't really care or it was a very carefully crafted performance (maybe he secretly wanted to be a member of ZZTop

).
Intellectually I think Stallman is brilliant.
The points he raised were well crafted and presented using strong metaphors and on-the-dot explanations. Stallman lives software development, so when he explains the 4 freedoms free software is about, he counts from 0 to 3. This surely earns him points with the developer community, but make communication with people who don't understand or care for developer's lingo more difficult.
In a nutshell his stand is, that software should be supported and paid for by the community of developers and users and money be made by customization and support. Commercial propriety software vendors in his are land lords who are only interested in a rent and want to exploit the users by making them dependent. I only partly buy that argument. It lived off the fiction, that most of the users would be able to articulate in a programmers compatible way how they want software to work. Stallman himself is the living example, that development and progress are often (if not every time) are driven be spirited individuals. Also it does not match with my previous experiences. However I'll try to summarize his points. Stallman's 4 cornerstones of free software are: Stallman takes the moral high ground, that it is ethical to stick to the 4 rules and if a software doesn't allow it (e.g. by it's licensing scheme) one should not use it, to avoid a moral dilemma. He very clearly pointed out, that sharing is at the core of every community and builds a spirit of goodwill in a community. And anybody telling you that sharing is bad or wrong poisons the very foundation our communities are build on. He brandmarked the use of the word "Pirates" in a very coherent example (sidenode: Piracy is a huge issue in this part of the world, but the REAL stuff, with guns and speed boats): "Attacking ships and killing people is very very bad, helping your neighbour is amicable, so who has the right to call the later a pirate?". Another point: DRM in Stallman's view is Digital Restrictions Management, tuche I would say. He was kind of in line with Michael Moore who also pointed out, that the US is exercising a regime of fear: "How much fear does it take to stop sharing". On DRM he pointed out, that it would allow corporations to make business documents inaccessible to outsiders. This is probably a problem the auditors have to deal with soon, since most jurisdictions require that you keep your business records for many years in an accessible way!
On the economy of free software: when you buy a closed source software you make a decision about which support monopoly you hand your freedom over, while in Open Source you have competition and can switch whenever you are not happy. Well to me it doesn't seem so simple. Given the size of software systems switching your support provider might not be an option even if the source is open. Of course for commodities like operating systems he is right. On the economy: Stallman says 90% of software developers today make private software for corporations that never will be sold, so the net effect of changing the business model of the commodity software vendors might not have a big effect. It however has a big effect on the net cash flow especially in developing countries. While you would seek your support rather locally (talking to a guy face to face in your mother tongue has it's advantages!) licence fees would for sure be transferred outside the country. The micro-economic effects of paying for support inside your country can be quite dramatic POSITIVE.
Stallman compares the freedom of software with the freedom of press. A cornerstone of democracy is the press' ability to investigate and uncover. Therefore they deserve protection. Only open source software allows the same level of scrutinizing it, so the same level of protection is needed. His understanding and fear is, that both free press and free software are high up on the list of endangered species. He got another point there.
Stallman's stand on Software Idea Patents was easy predictable: Software is the implementation of abstract mathematical ideas, like the composition of a symphony is the combination of individual notes, accords and instruments. Software idea patents would patent individual ideas and thus contradict the very nature of the software development process. To protect whole software systems copyright is sufficient, patents are not needed.
A participant from the audience raised the question what he thinks about intellectual property (IP). Stallman answered, that anyone who uses the term IP is either confused or tries to confuse! IP is a melange of Copyright, Patents and Trademarks. All this rights ask different questions, aim at different protection etc. Lumping them together is only for the purpose of confusion.
At the end the cut the joke that he alter ego is a saint of the church of Gnuitius and did wear an old hard disk as his shine.
All in all I enjoyed the session and the chat with Richard very much, time to start the next GNU/Linux test. Now I'm looking forward, what Stevehas to say.