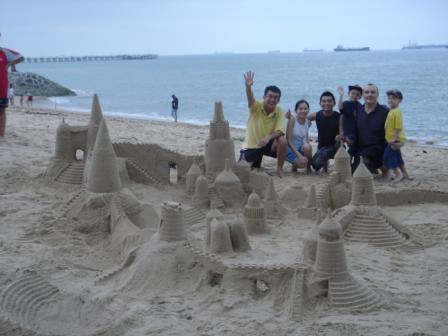 My friend Alvin Lee is "Mr Sand-Castle" He invented a toolkit to build sand-castles and teaches enables people how to use it have fun on the beach. He invited us yesterday to join him at the East Coast park for his weekly sand-castle building session. Anthony, Ernest and me gave Ida a much needed break by disappearing to the beach for the whole afternoon. It takes a child about 30 seconds to get exited about sand castles and Anthony and Ernest were carrying buckets of seawater to wet the sand, dig up big sand hills and forming towers, walls, bridges. The joining adults took 10 times longer to get into the mood, but after 5 minutes the corner of the beach looked very much like "Camelot under construction with" a lot of busy people working at something.
While I was creating my share (a mix of the great wall of China with Rome's colosseum), I realized some important facts:

As you probably have heard Interactive Corp. bought AskJeeves for a staggering 1.85B USD. This looks like a lot of money. However taking a closer look shows a quite different picture. IACI is paying in stocks, so basically they print the money for the buyover. So how much is the deal REALLY worth? Let us try an inverse calculation.
Assumption: The value of Interactive Corp doesn't change. And if you look at the stock price, it actually was going down. The true market value of a stock are the number of shared that are publicly traded. The highest traded volume of IACI (in the last 12 month) was 32M shares. With the current market capitalisation of 15B this is about 5% of the outstanding shares.Let us assume, that the percentage of publicly traded shares is about 4 times of that. Why would one want to count the publicly traded shares only? The idea is: the market can't take in any amount of shares, so demand and supply regulate not only price but also volume. If stocks are thrown on the market in large numbers the price would suffer. Therefore the sellable stocks represent the true value. Because even if something has a stellar price tag, if one can't sell it, it's worthless. I would call that "capital in market". In our case the capital in market  is about 3B. So the new shares are worth not 1.85B but 370M. Suddenly the deal looks much more reasonable.
I'm sure I've violated any established economic calculation, however I think it's not beyond reason. 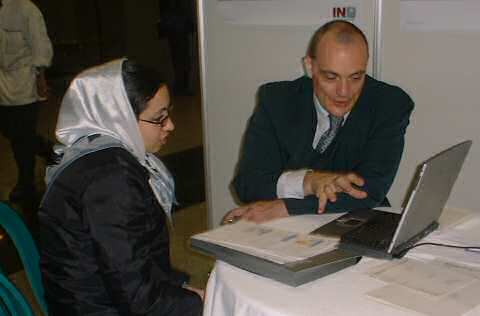 Explaing UMsys to a quality manager.

What do you do in a country where big US brands are a NO NO, but chicken fast food is a feasible business? Well you name your business in such a way that it sounds like KFC when pronounced in the local language.

You also could borrow some decorative ideas <g>. And NO I didn't test it. Our host gave us no chance to surrender to such a temptation, but fed us with excellent food and entertainment.
And NO I wasn't there to talk about nuclear fuel. I did attend the Management Excellence conference in Tehran as an exhibitor and key note speaker. You can download the presentation from the UMsys website.
Hospitality in Iran is outstanding and the speakers had a good time presenting to a special audience. Special in a sense, that using handphones or taking a break by walking out was considered quite acceptable behaviour. It was also special for me, because it was my first presentation with a translator. He was standing with me on stage and translated and explained every sentence I made into Farsi. Preparing for that gave another boost to clarity of my message.
The Iranian economy is quite interesting. The workforce is VERY young. One of our hosts claimed 80% are below 30, everyone wants to do business, most of them rather keeps the government out of it (which is kind of difficult since the big industries like Oil&Gas, cars, mining etc. are government dominated and everyone wants to improve. I've seen very modern very advanced estates in Tehran and quite some outdated stuff too. What differs from sights I'm used to other places are the drastic contrast.
Carefully spoken (since I need to return there). The fact that the population is rather young and the government rather old, suggests that their might be at least generation tensions if not more, that make a change in government without outer influence a possibility that is not so out of this world.

Fullstop, customer lost.
I had a fairly simple question: Does my phoneline support 3.5 MBit ADSL. I thought I had expressed that question fairly clear and I had mentioned, that the support form does not work for prospective customers. However it seems my friendly support guy didn't get it:

Thank you for your email.

We have been advised by our Technical team that our offering does not warrant
that the services will be uninterrupted and/or error-free. For better
details, please refer to the webpage at
http://..removed to protect the not so innocent ...

We hope we have addressed your concerns. For further clarifications,
please reply to this email or you may visit our webpage at
http://..the url for existing customers to send
us an online feedback form.

We look forward to serving you."

How can they expect that I build up confidence if they can't answer a simple question?
Should I give it another try