Our general election is coming up next Saturday. As an permanent resident I'm neither eligible to vote nor to be elected. This doesn't seem too much a loss to me, since the outcome is quite predictable. Since Singapore's independence the Peoples Action Party (PAP) under the reign of Mr. Lee Kuan Yew has won every election so far, it is quite sure that they will win this time again. This year they announced to run for a clean sweep: they want to will all of the 84 seats in parliament (they held 82 before). Around election time, it is not uncommon, that opposition politicians face libel suits (that would both deprive them from funds and the right to stand in an election). The mainstream press has been accused to biased in favour of the government, (political) video and podcasting has been banned during elections, hot election topics become part of a law suite (so it becomes an offence to blame anybody) and senior politicians threaten voters that the executive (which should be apolitical by definition) would neglect them once they vote for the opposition. Also the opposition is not very strong in numbers, they can't field a team to contest all 84 seats.
No wonder that besides a low record on press freedom, Singapore doesn't score well on the Asia Democracy Index either.
Nevertheless, it seems this election seems to get a little more interesting than before:
First of all, for the first time since 1988 the opposition fields enough candidates to contest more than half of the seats, so the PAP didn't return to power on nomination day (which is only a few days before the elections to shorten the campaign time, which otherwise could dent Singapore's productivity). The opposition dares to contest the electorate run by the prime minister The team is young and unknown, so any vote for them rather counts as a vote of no confidence for the incumbent prime minister Lee Hsien Long (son of Lee Kuan Yew --- anybody thinking it could be this, better gets ready for a libel suit). But the most surprising fact, since very little is found in our local press: the opposition seems to enjoy quite some support. The famous Singapore Blogger Yawning Bread reports from a rally of the opposition Worker's Party in Hougang. He estimates up to 100000 people might have attended this event. That would be quite a number for Singapore. I wasn't aware of it until Mr. Wang mentioned it.
Wasn't it an old Chinese curse? "May you live in interesting times!"

Getting assimilated into IBM takes a lot of my attention right now. I've been presenting on Lotusphere comes to you in Manila and Singapore and managed to get Ed for a usergroup session in Singapore. The group was very pleased with what Ed had to say and his session was the only one where they asked questions (we are shy in this part of the world <g>).
Tomorrow we are all travelling to Kuala Lumpur for the Malaysian session.
Last week I had my initiation session to IBM values. IBM's corporate motto hasn't changed since Watsons time and is simple, clear and to my liking: Think!
Stay tuned.

And for the majority of other faith in this part of the world: Happy spring/fertility celebration (wasn't that what the Easter egg was all about?)

About religion and spirituality

One of my favorite Singapore bloggers is Mr. Wang who " bakes good karma". I like his fine ironic and well pointed style. Today he muses about spirituality, religion and the small mind. It could be a pice of mine, if I would posess the same power of expression. In a nutshell he says: " The problem, as I see it, is that the human mind is unwilling to accept uncertainty ... Some people would rather die (literally) than ...  to consider the alternative idea." Seems good Mr. Wang and I share the Buddhas view: " Work on you on salvation. Do not depend on others" (and don't impose your view on them)

This is what happens when you wear an OpenNTF T-shirt in public. 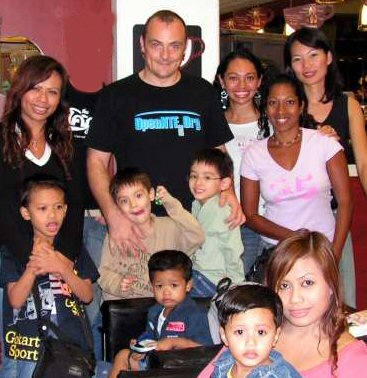 .. the kids like it too. (Shameless plugged from here)

How elastic is the music demand?

<rant>
Common market theory tells us, that price is a function of supply and demand. In case of digital goods the theory is flawed since one digital good (in the limits of bandwidth) is in unlimited supply. So the ability to price is bound to stimulation of demand. Or even better: if you can fix the demand you can play with the price at will (Just ask your next drug dealer about Junkies' insensitivity to the price of their next shot - they simply have to have it).
The music industry seems to believe, that their customers are junkies and need their daily shot. And weeding out (pun intended) any alternative supply guarantees pricing power. I can't imagine no other set of mind, seeing how the industry is treating their customers as criminals.
What could, and in my opinion will happen: slipping quality of music offerings paired with a growing number of people being p****d off by the industries attitude will send sales south leading to more panic in the industries execs' offices, leading to more customer harassment, leading to..,, you get the idea. In a country where copyright violation by file sharing carries the same sentence as man slaughter there is a serious lack of perspective or a serious warp in the perspective of the legal system.
Copyright first and foremost is a private protection right, dragging it into criminal law is bad (there are enough other provisions to punish for *profiting* from Copyright violations), as is DRM.
And I'll demonstrate that with my purse strings being closed for music purchases until it is resolved.
</rant>