Authenticate from Salesforce to Heroku with JWT

Heroku PAAS is an easy and flexible way to extend Salesforce functionality.
Its easy to call out to a Heroku REST service build with a method of your choice: Java, JavaScript, Ruby etc.
The usual sticky point between two platforms is the identity of the caller.

In a lot of cases the only requirement is "a valid Salesforce user", eventually with some additional claims added.
For this scenario a JWT Bearer authentication (RFC 7519) is a good pick.

When you look around, most examples revolve around a JWT token being issued after some means of authentication from the same system that was authenticated against.
This scenario is different: The Salesforce server issues the JWT token and code on Heroku validates the token as authorization.
The beauty of the approach: no extra calls need to be made to get this working.

What you will need:

In Salesforce setup open Certificate and Key management.
Create or pick a key. Note down the name. For this article I will use YourCertNameHere. Open the key and click on Download Certificate.
The cert will be downloaded in crt format. We use this file to extract the public key that Heroku will use to verify the signature. To get the key use:

The String we need is between the BEGIN and END lines, excluding the lines. You can store it into a file or create a Heroku environment variable.
Since it is a public key, you don't need to guard it as fiercly as your private keys.

Before making a call-out to Heroku, you need to componse the signed JWT token. That's done in just a few lines:

You might opt to add additional claims beside the subject, when your use case does require that.
The header value gets added to the Authorization header as Bearer authorization.

I'm using the jjwt library which is available on Maven Central.
It makes it simple to retrieve a claim. An expired claim or an invalid signature will throw an error, so wrap it into a try/catch.

The only catch in the code was the need for MimeDecoder instead of a standard Decoder for Base64 decoding.
The subject, typically the user, can be retrieved using claims.getSubject()

Next stop, for another blog entry: the NodeJS equivalent.

Using LetsEncrypt certificates in your JKS

Dealing with certificates in Java is always fun. The keystore Java uses is different from the certificate files you are used to in your web server or node.js.

Salesforce is build on Java, so we have to make peace with the Keystore. This article outlines the steps to use a LetsEncrypt certificate in a keystore. You will need:

For this sample I will use the Domain ???demo.example.com???

Obtaining a PEM certficate from LetsEncrypt

Easiest is to use the certbot utility on a Linux machine (e.g. spin up an instance on Heroku). DigitalOcean has detailed instructions.
There used to be a tls-sni challenge which was marked insecure, so you want to the DNS challenge.

First concatenate all PEM files into one. Presuming you used the Letsencrypt mechanism:

Then use OpenSSL to convert that into PKCS12 format. Note: if you do that on a Windows command prompt you must run the command prompt as administrator otherwise you just get an error

The Salesforce import utility is picky about Alias names. The previous import created the entry
Alias name: 1 which needs to be updated:

And voilah, you have a properly signed certificate for your Salesforce instance. Downside: to be repeated every 90 days.

A filtering proxy server with vert.x

You have this nice application running in your (cloud or on premises) environment and then a big scare hits. Suddenly you need to remove or mask different streams of data depending on all sorts of conditions your legal department is torturing advising you.

Until your applications natively can do that, you might resort to a content filter that sits as a proxy between you and the application (technically it is a reverse proxy, but that's fine print).

To explore the feasibility of such an approach I created SampleProxy based on work of Julien Viet using vert.x as my runtime environment. 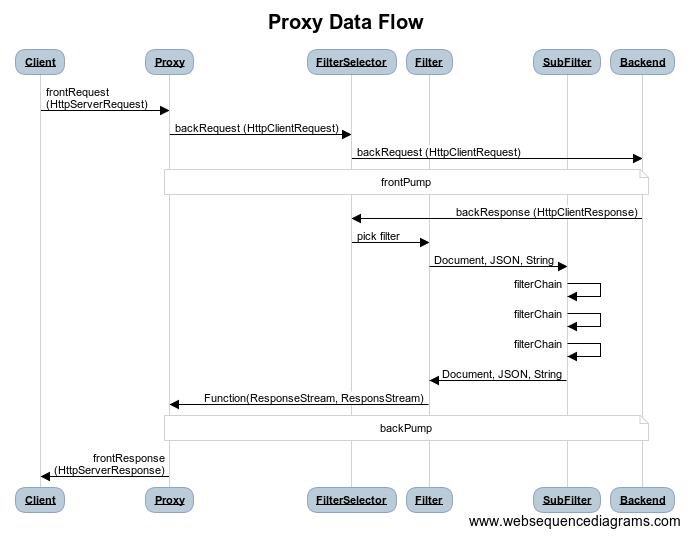 Things I learned along the way

There are always a few lessons to be had, here are some from this project:

Go check it out and let me know what you think! (Yeah - documentation needs some work).

Caveat (a.k.a disclaimer): this is a prototype and work in progress, YMMV!