From Excel to package.xml

Cleaning up an org that has gone through several generations of ownership and objectives is fun. Some tooling helps

A computing principle, very much the anathema to Google and Facebook, is Data Frugality, storing only what you actually need. It is the data equivalent to coders' YAGNI principle. Latest since GDPR it got center stage attention.

So your cleanup exercise has a few steps:

The absolute standard approach, of any consultant I have encountered, is to fire up an Excel sheet and track all fields in a list, capture insights in the remarks column and have another column that indicates can be deleted Status. Something like Yes,No,Investigating or "Call Paul to clarify". I would be surprised if there's a different approach in the wild (in theory there are).

In a current project the consultant neatly created one sheet (that's the page, not the file) per object, labeled with the object name, containing rows for all custom fields. Then the team went off to investigate. In result they identified more than one thousand fields to be deleted.

Now to actually get rid of the fields, you could outsource some manual labor to either go into you org or use Copy-Paste to create a destructivechanges.xml package file for use with the Salesforce ANT tool.

In any case: the probability that there will be errors in transferring is approximately 100%. The business owner will point to: I signed off that spreadsheet and not that XML file! Finger pointing commencing.

There must be a better way

In Part 2 we had a look at the plan. Now it is time to put it into motion. Let's setup our project structure

Put some order in your files

Our goal is to distribute happy soup artifacts into packages. In this installment we setup the directory structure for that. Sticking to a clear structure makes it easier to get a step closer to package Nirvana step by step. 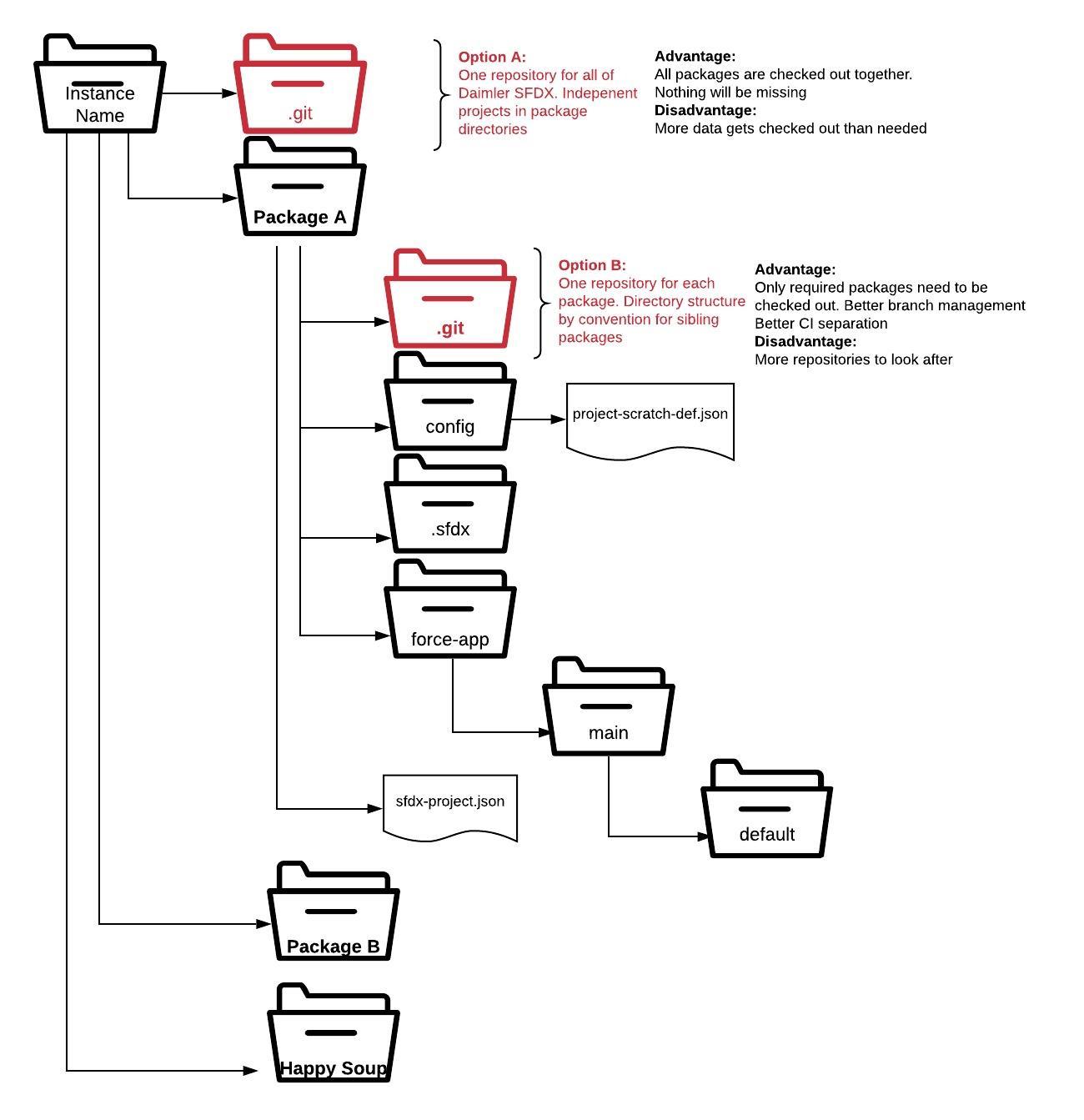 Let me run through some of the considerations:

When using pull and push from VSCode it will use the default user name configured for SFDX. To ensure that you don't push to or pull from the wrong place, you need to create one scratch org each using sfdx force:org:create --f config/project-scratch-def.json -a [ScratchOrgAlias] and then execute sfdx force:config:set defaultusername=[ScratchOrgAlias].

The command will create a .sfdx directory and config files inside in your project. Unless all developers checking out that repository use the same aliases (unlikely), you want to add .sfdx to your .gitignore file.

Now you are all set to move files from the happy soup to future package directories. With the relative path in your sfdx-project.json no packaging is required now and you still can get a fully functioning scratch org.

One pro tip: instead of relying on individual scratch definition files, you might opt to use the one in the happy soup, so all your scratches have the same shape.

Next stop: building the solution before you package. As usual YMMV.

We stormed ahead in Part 1 and downloaded all the meta data in SFDX format. Now it's time to stop for a moment and ask: what's the plan?

You need a plan

When embarking on the SFDX package journey, the start is Phase 0. You have an org that contains all your meta data and zero or more (managed) packages from AppExchange. That's the swamp you want to drain. 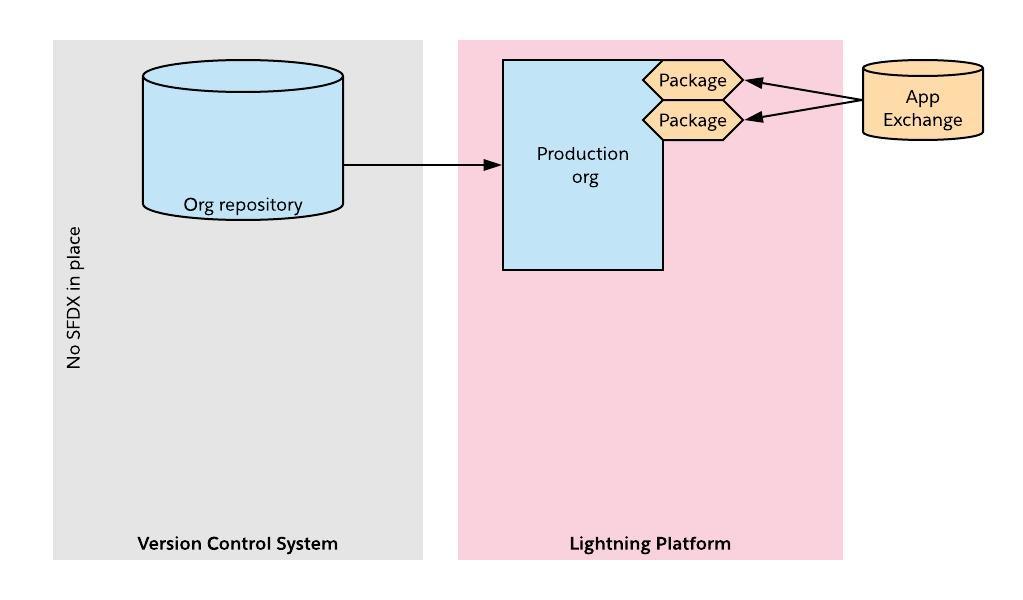 Before you move to phase 1, you need to be clear how you want to structure your packages. High level could look like this:

A common setup in many organizations is to outsource development and/or operation to a system integrator. For agile organizations that can post a challenge. A key is skillfulness - how fast and good can it be implemented?

Does your System Integrator invest in efficiency?

Competition is supposed to keep cost at bay, however customer relation and familiarity with the environment (In Dreamland everything is documented) pose a substantial barrier to entry. A barrier to entry will enable an incumbent vendor to charge more.

So an engagement manager might see him/herself confronted with an interesting dynamic. 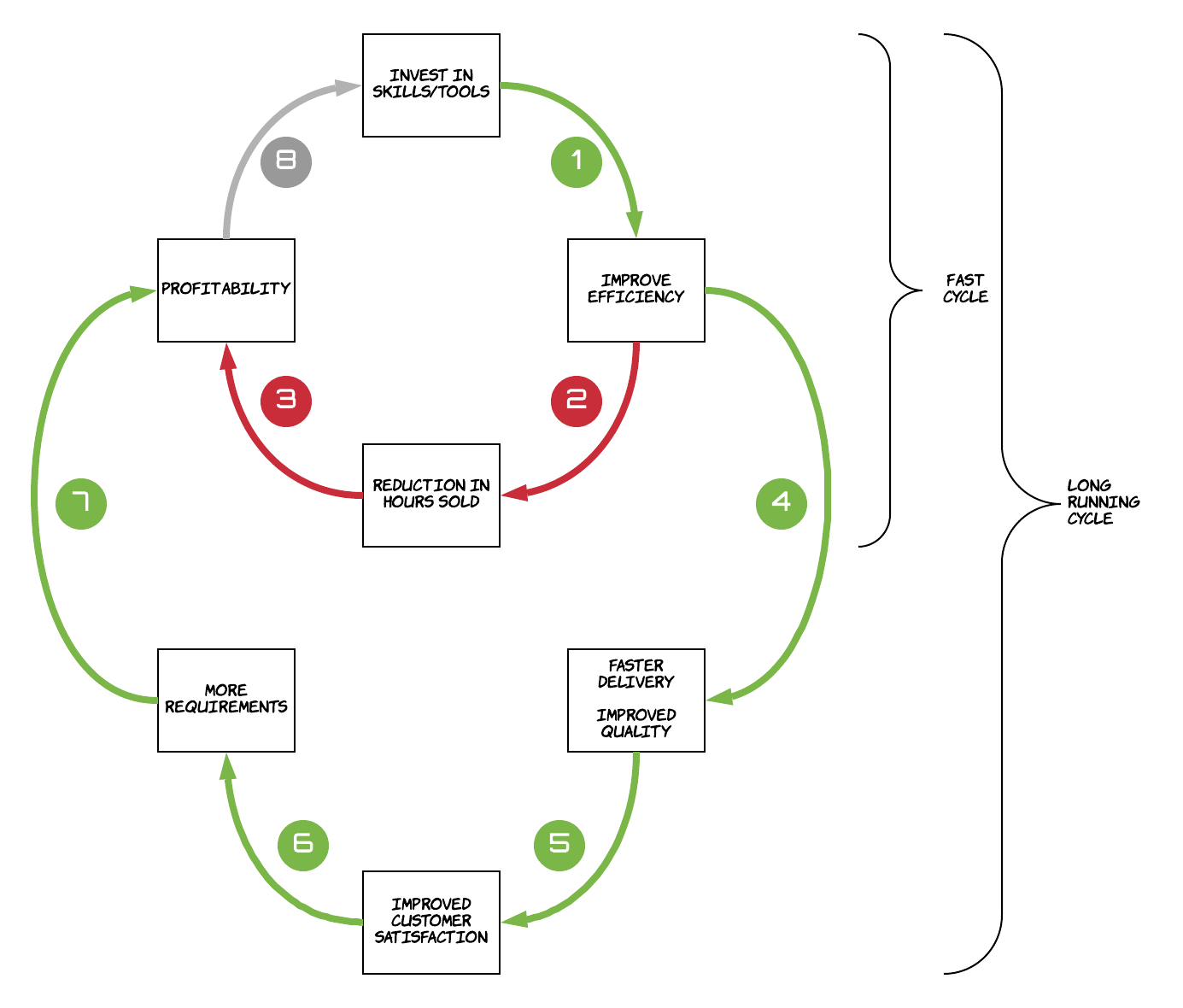 There are a slow and a fast loop running concurrently. Depending on the planning horizon, the engagement manager might not see the outer loop to the detriment of all participants. Let me walk you through:

This is a nice example of a Systems Thinking Feedback Loop. Conclusions vary on observed time frames.

I'm following the approach "Throw and see what sticks to the wall". The rough idea: retrieve all meta data, convert it into SFDX format, distribute it over a number of packages and put it back together.

To make it more fun I picked an heavily ~~abused~~ customized and used org with more than 20,000 meta data artifacts (and a few surprises). Follow along.

Trailhead has a module on unlocked packages on its trail Get Started with Salesforce DX.

While you are there, check out the (at time of writing the 15) modules on Application Lifecycle Management.

The limits for retrieving packages (10,000 elements, 39MB zip or about 400 MB raw) posed an issue for my XL org. So I used, growing fond of it, PackageBuilder to download all sources. It automatically creates multiple package.xml files when you exceed the limits.

Validation formula are a convenient way to ensure your data integrity. With great powers... comes the risk of alienating users by preventing them entering data.

Why look at them?

You can easily look at all formula in the Object Manager, but it is tedious to look at every formula one by one. You might ask yourself:

You already use PackageBuilder to extract objects (and other stuff) as XML, so it is just a small step: slap all *.object files into one big file and run an XSLT report over it.

Not so fast! If you concatenate XML files using OS copy you end up with three problems:

A bit of tooling